Bridge Markland curated this section to show drag - queer - trans - artists she met through her tours around the world and in her home Berlin. Artists she experienced + was thrilled by, performative art that spoke to her deeply. Experiences she would like to share with cherished viewers. 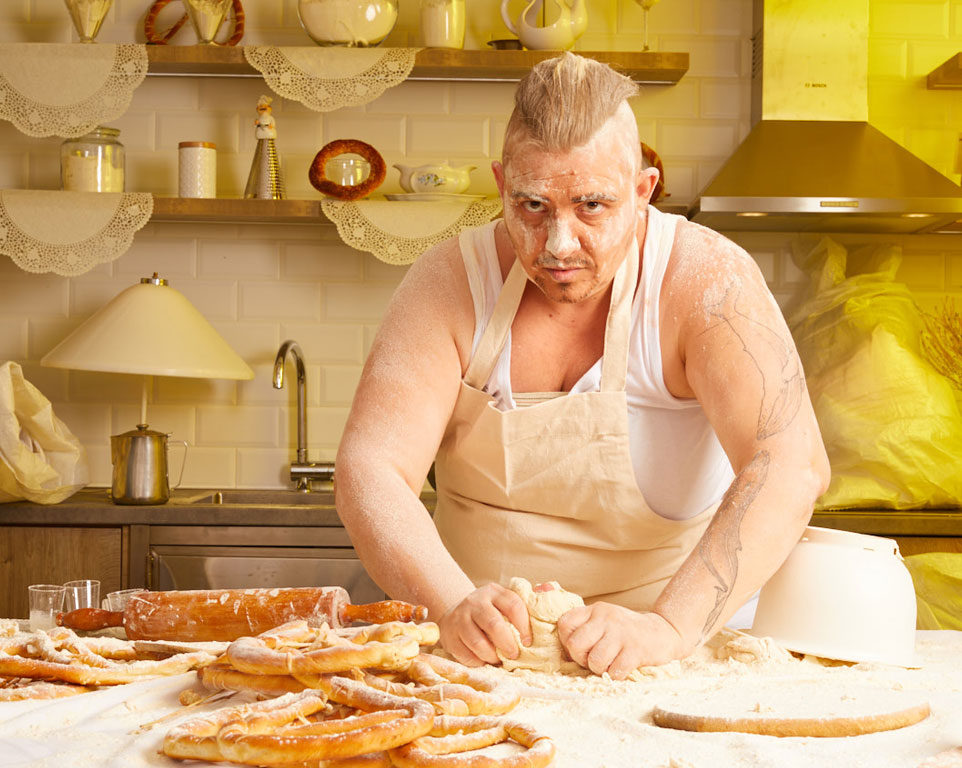 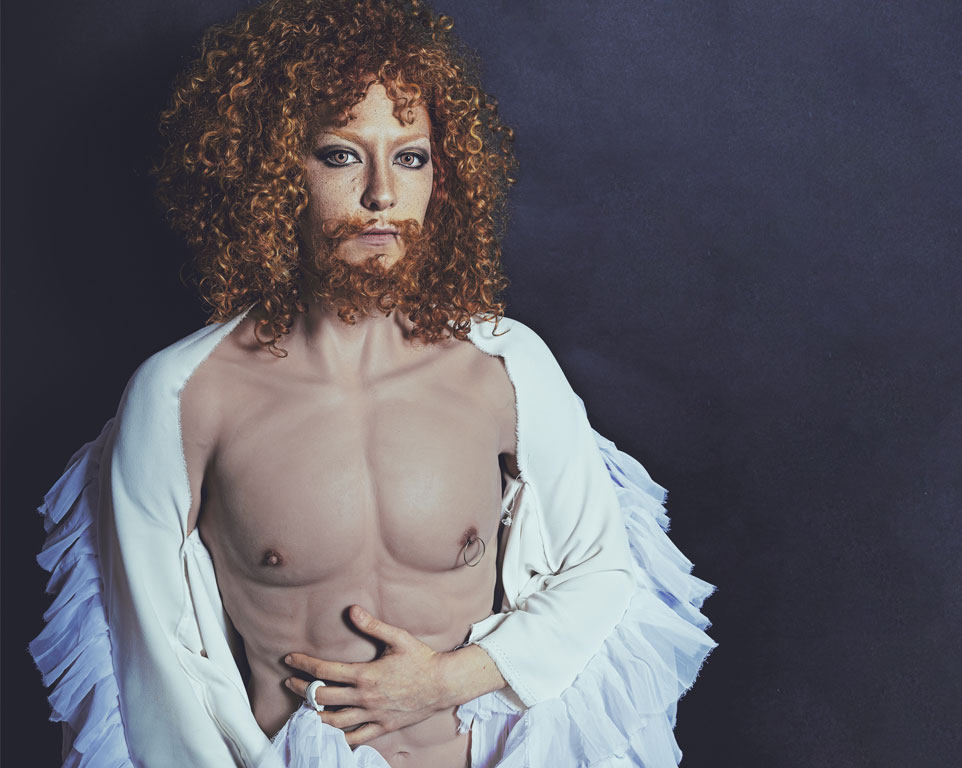 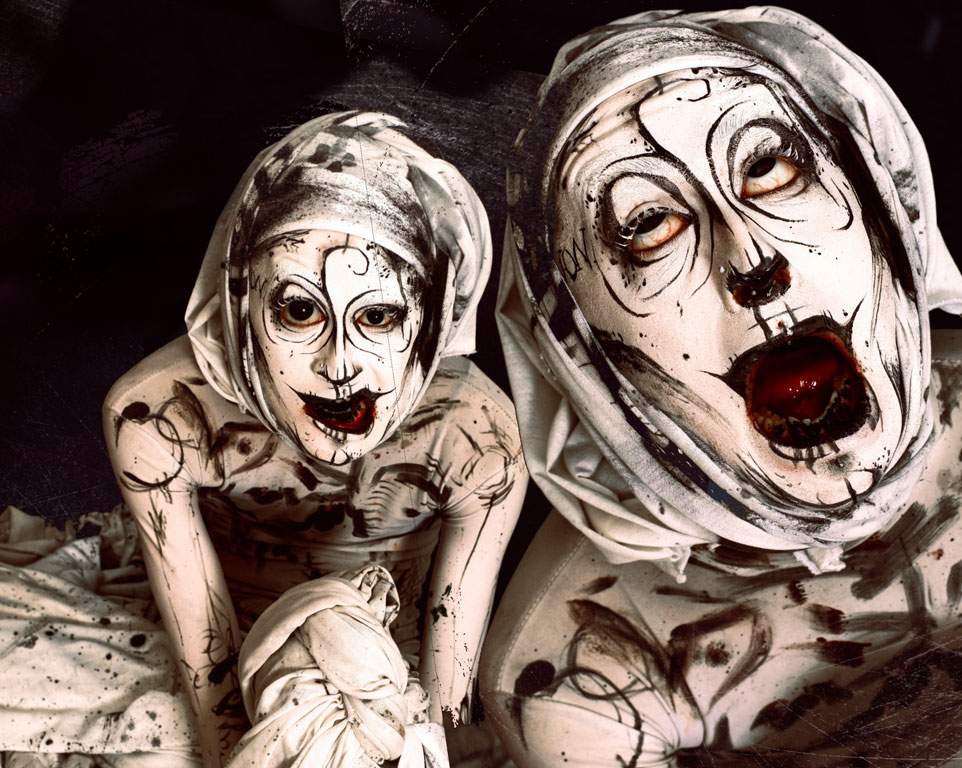 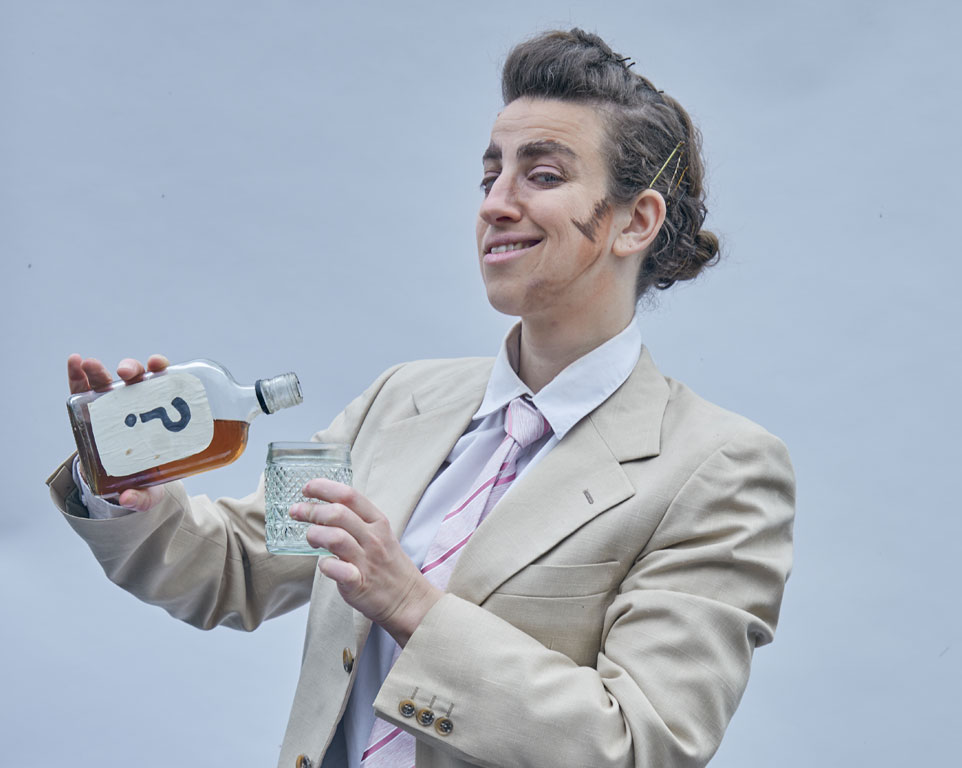 Very Confused Straight from the 4th dimension, this vision appearing on your reality like a virus is named Very Confused. The pride of underground emotions, trip on catharsis and traveller of our matrix, this water colored clown transcends gender, words and realities.

Mona Guyard is a 22 year old queer multidisciplinary artist based in Berlin. Créatrice of Very Confused and Mona LaDoll, without and refusing any academic formation, expert by experience, Mona has been performing in Berlin for the last 4 years. Cabaret, burlesque, drag king, queen, quing, clown, make-up, freakshow, costume. Mona has been performing in spaces/venues and with companys such as: Venus Boys, Lunacy, Cirque Queer, Overmorrow, Fusion Festival, The Peepshow, Bridge Markland's: queens + kings.
Photo of: Very Confused: Kai Heimberg

Richard P Dick Van Johnson is an international almost TV sensation complete with an immaculate coiffeur and maculate sense of humour. He was born at the Man Up drag competition in London, raised in his bunker during Covid lockdown live streams and finally got his own live cabaret show in Berlin. Richard has gone on to inspire business men in airports across the country as an icon of masculine style in the "Magazin für Lebensästhetik" Max.

Duckie L'Orange is an Australian born, Berlin based multidisciplinary artist fusing clown, puppetry and drag to create multi-layered performance pieces. She also works in the immersive and installation fields, creating provocative new worlds to explore, and in community cultural development, helping others find their expression.
Her creations have taken her across Australia and Germany, to Denmark, Timor Leste, Indonesia, the UK, Poland, France, Austria, and the US.
Her versatile work can be seen in a wide variety of settings; theatres, bars, nightclubs, car parks, festivals, rooftops, art galleries, the beach, the circus and at high profile places such as Burning Man, Sydney Opera House, Fusion Festival and on National television in both Australia and Germany.
Photo of: Duckie L'Orange: Jana Rothe

Binary Wall performance of how we grow up in binary structures and how they can get blown up.

Buba Sababa is one of Berlin's most prolific drag kings, the reigning King of Kreuzberg of the 2021 Mx. Kotti drag pageant. As a member of the Venus Boys Collective he is one of the leaders of Berlin's Drag King Revolution. He produces shows all over Berlin and has made a name for himself facilitating community workshops for up and coming Drag Kings, and letting new King performers take their first steps on his stage at his monthly show „König" at Tipsy Bear. He is a chameleon of performance, cabaret, and theatre, as well as a gifted costume designer and teacher.
Photo of: Buba Sababa: Kai Heimberg

Toxic Pleasure
By combining the forms of guided meditation, lecture-performance, and life-coaching rhetoric, Zed Zeldich Zed will present a 20-minute long delicious performance centered on the notion of Five White Deaths. On occasion, he will be speaking about the effects of bad habits affiliated with sugar, fat, flour, and salt; he will reveal the fifth white death, an outstanding discovery that symbolizes the systems of (white) supremacy.

Zoe Gudović is a feminist, lesbian, multidisciplinary art practitioner, activist. Whether acting as a theater educator, performer, drag king transformer, or toilet artist, she combines artistic and activist methods in order to change the existing consciousness and social relations. Gudović created the figure of Zed Zeldić Zed in 2003 and ever since this character has led an autonomous life taking them both into incredible adventures. 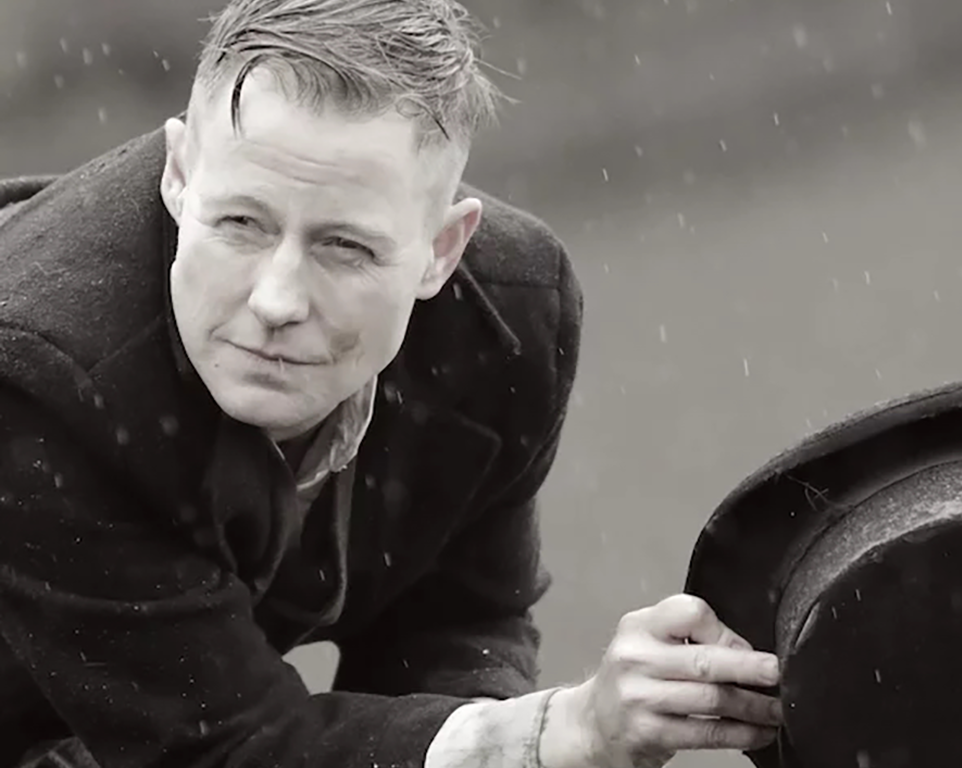 A true story of the Victorian Trans Pioneer.

Harry built chimneys by hand until 1860 and is proud to be part of Manchester's worker bee history. From a young age they dreamed of having their own trade, on their own terms. Women weren't allowed to run businesses and Harry knew they'd never be another man's property. The Victorians called Harry an 'epicene' - not man, not woman, but in-between. As a pioneer of equal human rights, Harry would be honoured to shake your hand, in solidarity with those silenced in the shadows. In-situ filming with live performance and digital technology will shine light on this unsung hero's journey, transporting us back in time to celebrate TransCestory.

"This is a recorded 1st work in progress followed by a filmed Q&A for audience engagement, feedback and development."

Attention: By entering this show - you agree to be filmed live!

Harry was proud to have become an integral part of Manchester's worker bee history, having built chimneys by hand until 1860. Harry's young dreams of having a trade on their own terms eventually came to fruition. When Harry was young, women were not permitted to run businesses and certainly not in the construction trade. Harry was never destined to become another man's goods and chattels; no man's wife. The Victorians called Harry an 'epicene': not man, not woman, but in-between.

We will transport you back in time to hear the story of a pioneer of human rights and social justice. Harry would be honoured to meet you and shake your hand in solidarity. We will detail the places and spaces Harry moved through, with in-situ filming, live performance and digital technology mapping. Harry's freshly unearthed journey shines light on people erased in the margins of Victorian Manchester, and gives voice to those silenced on the periphery - past and present. Expect ghostly shivers in this extraordinary story of one of our unsung heroes of Manchester's iconic past.

The Gender Joker, aka Joey Hateley is the Artistic Director of TransAction Theatre who creates innovative cross-cultural performance from the periphery. Joey is a female man who’s work ‘Q’uestion’s LGBTQI boxes, calling for a world beyond gender binaries, transcending boxes and borders of difference through politics of allegiance. 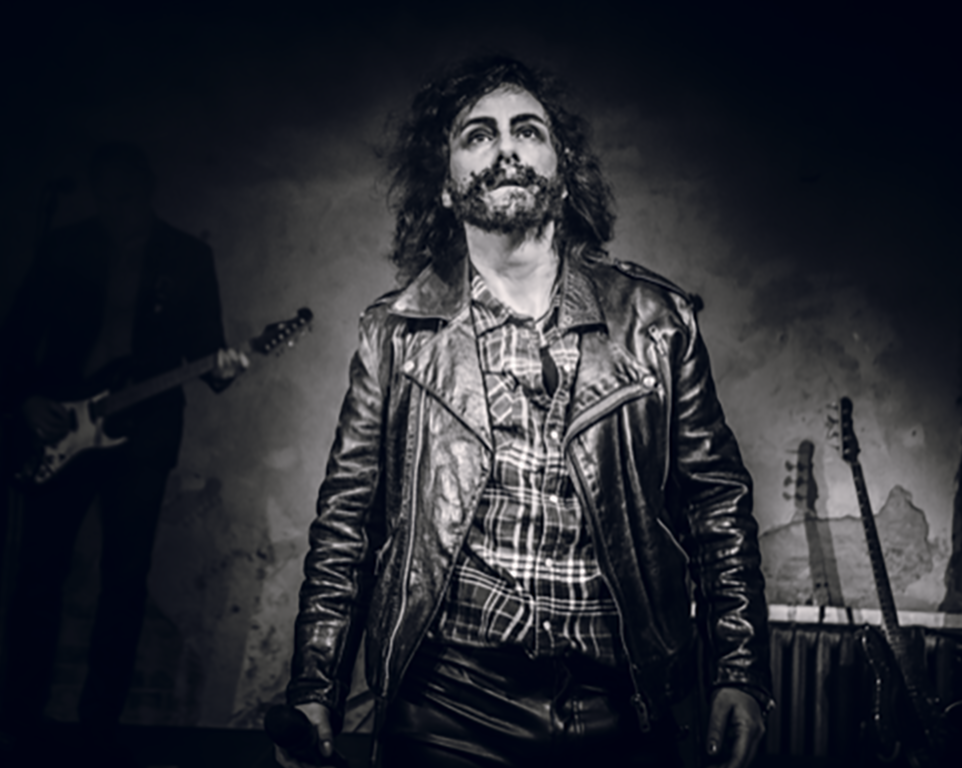 Peter Frost (Berlin/Germany) -
LOVE ME - how wolves can change rivers

Forget your Zoo, leave your Banks. We don’t accept your borders.
Welcome to an open space. Inside out. Outside in.
,Cora Frost‘ as Alter Ego Peter Frost will talk about themselves and about men, who made the world a bit better.

Heros we need. Peter Frost might be a macho, but he has got a golden and sensitive heart. He wants to be political and sentimental. In Peter and his band mates burns the fire of pain and passion. They are men and they make music. Only at night. Only sometimes. And only for you. Extremely sad guitar rock. Stickily sweet as a sugar cone, hard as life. 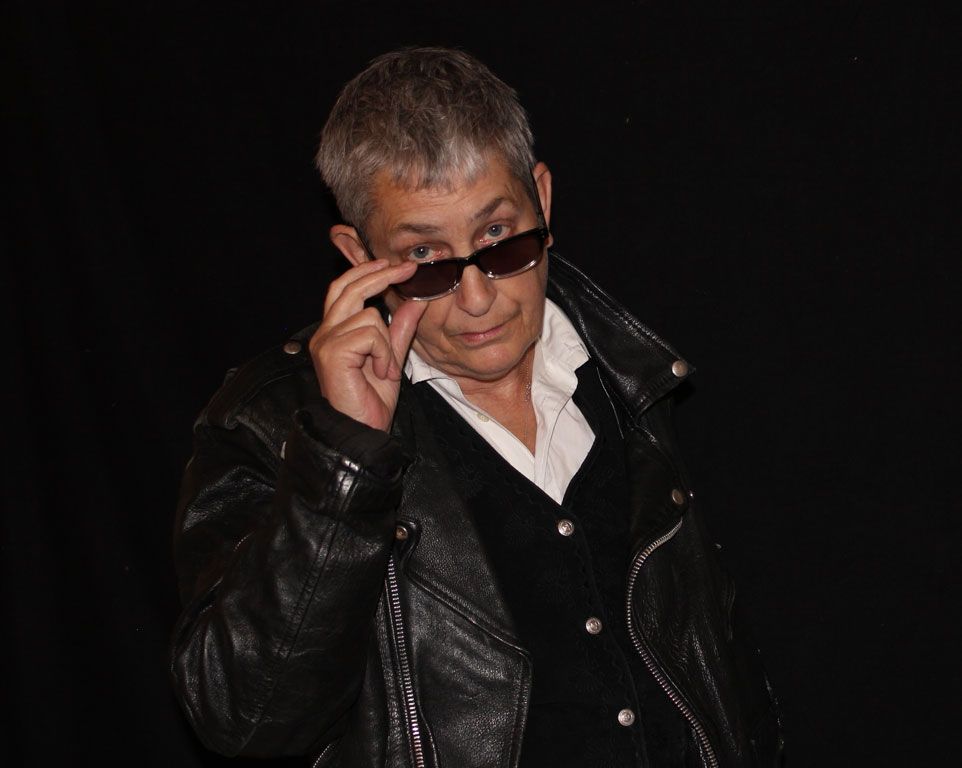 Inspired by Kafka`s Metamorphosis H to He adds new twists
in the maze of gender identity and sexuality ...

Imagine waking up one morning to discover you are turning into a man:
"The thought is in my head before I’ve opened my eyes. I dismiss it as the remnant of uneasy dreams and wake up fully, aware that I’m scratching. I don’t itch but my skin is thick and tingling, drawing attention to itself. I’m turning into a man ... Will Tina fancy me now?"

written and performed
by Claire Dowie
directed by Colin Watkeys

H to He is very visual, very camp and outrageously funny in a compassionate and sensitive way - a play about metamorphosis and self image, the genderfication of vegetables, shopping and unrequited love.

"an original piece of theatre: challenging, uncomfortable, funny, shocking even, and entertaining along the way"   The Herald

"And that`s the cunning twist Claire Dowie uses to explore not just aspects of female ageing, but also gender identity and sexuality. Before our eyes she morphs from defiantly mini-skirted swinger to trousered geezer with grotty hygiene, sloppy habits and lecherous urges - a heady mix of monologue stand-up comedy and cabaret"   Rainbow Network

Claire Dowie has written and performed numerous award winning plays, including “fringe classics” Adult Child/Dead Child, Why Is John Lennon Wearing a Skirt?, Death and Dancing and H to He (I’m turning into a man)

She has a reputation for work that defies categorisation and is renowned for her ground-breaking subversion of gender expectations and stereotypes. Originally trained as a dancer, she started writing poetry (published by Faber and Apples and Snakes) and quickly gained a reputation as an outspoken and hilarious stand up comic on the cabaret circuit in the early eighties. She ran out of punch lines and started writing plays, inventing her own genre: stand up theatre.

Her work is translated into many languages and performed throughout Europe and the rest of the world. Her plays are also studied in schools colleges and universities as part of Gender Studies as well as English Literature and Drama.

She has four collections of plays published by Bloomsbury Methuen alongside her first novel Creating Chaos which is also published in German and Italian.
Photo: Colin Watkeys 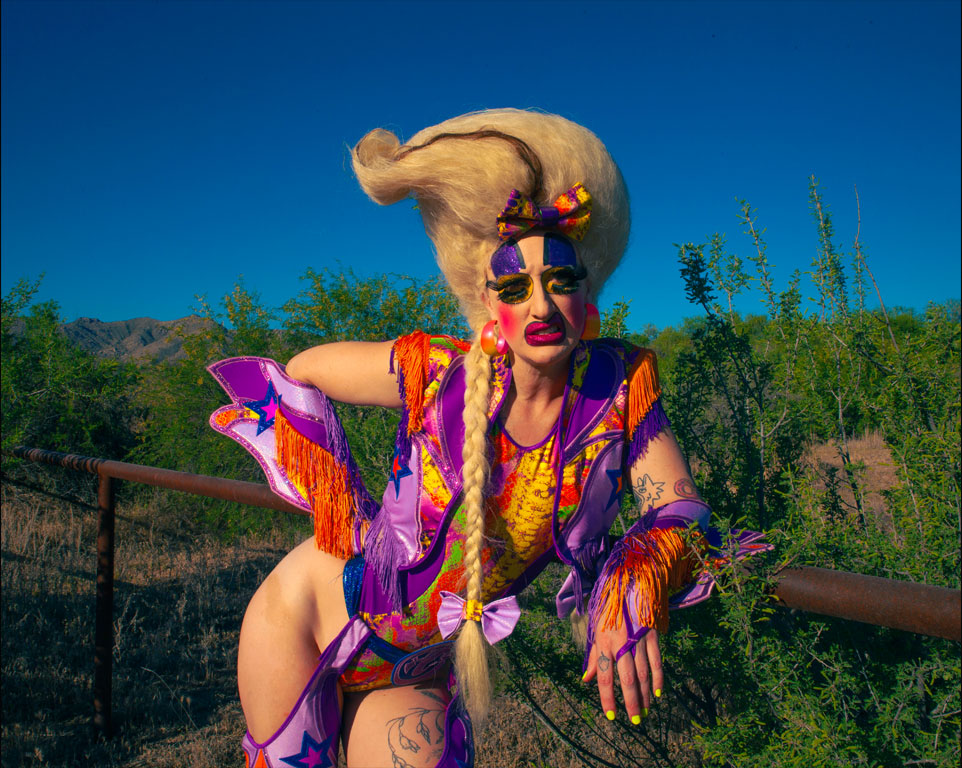 Goodnight Cowboy is a performance work that uses iconography from Margaret Wise Brown’s children’s book „Goodnight Moon“ and American western films. Cherdonna explores the myth of the conquest of the west, false heroism, how this heroic event is a construct and a farce filled with melancholy. Goodnight Cowboy explores themes of loneliness, isolation, the silliness and limitations of American mythology, and delves into things that seem simple but are complex. This work asks: What is wildness? What is tamable? What is America’s obsession with stereotypical masculinity, the illusion of masculinity, and the performance of masculinity?

Over the last 15 years, Kuehner has created and performed over a dozen evening-length works and performance installations described as “uncategorizable spectacles” (The Stranger).

Jody is a 2020 NEFA’s National Dance Project finalist, 2017 Artist Trust Fellowship recipient, 2017 Henry Art Gallery Artist in Residence, 2016 NEFA’s National Dance Project awardee, and 2015 Stranger Genius Award winner. She has been presented in Seattle at On the Boards, Seattle Theater Group, Washington Ensemble Theatre, The Henry Art Gallery, and the Frye Art Museum. She has been presented in the Unites States at the University of South Florida in Tampa Florida, the Meanings and Makings of Queer Dance in Ann Arbor, Michigan, The Yard at Martha’s Vineyard, American Dance Festival, Durham, North Carolina, and FringeArts in Philadelphia, Pennsylvania. DITCH, a three-month gallery exhibition, was presented at the Frye Art Museum, Sarasota Art Museum in Tampa Florida, and at The Momentary in Bentonville, Arkansas. DITCH was featured in ARTnews, i-D Magazine and NBC 12 must-see LGBTQ art shows around the world.
Photo: Lou Daprile 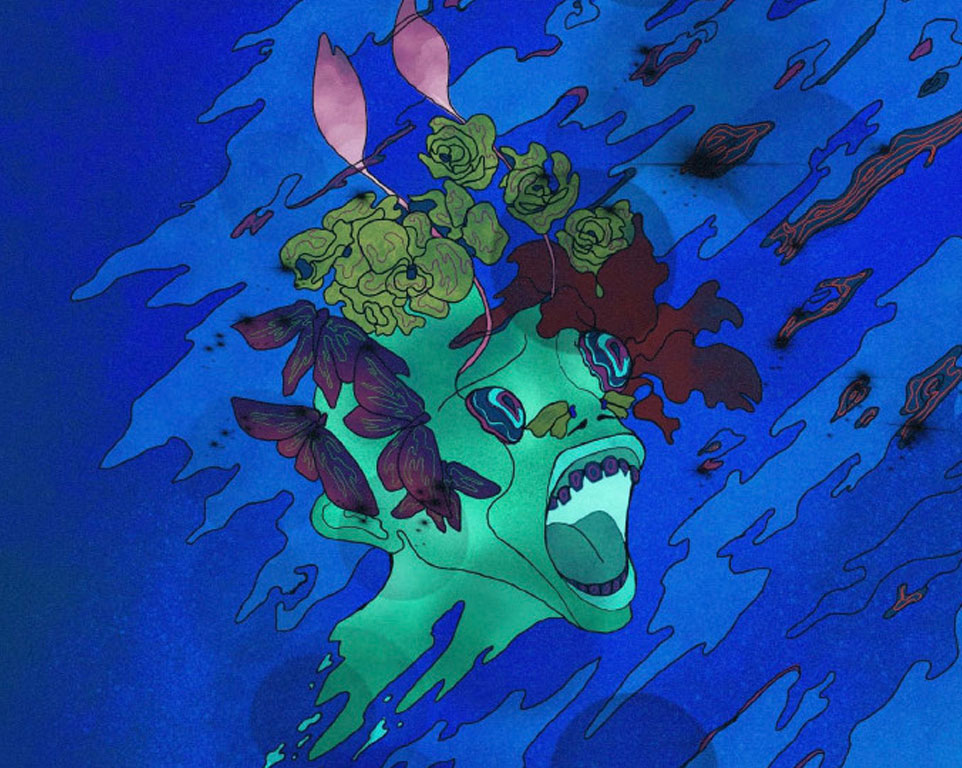 The drag collective House of Living Colors focuses on the climate crisis, showing that a diversity of identities is as essential for the survival of our society as is biodiversity for nature.

Endangered species was first presented right before the first lockdown in 2020, and was a forecast on what was about to happen in the world. "Endangered Species 2.0" taps on the “post apocalyptical” knowledge and experience of queer and trans people of color and how their ancestral and spiritual connection to nature helped us survive and reborn after the pandemia. In a multimedia performance combining voguing, spoken word, live music and other, non-Western art forms, they make it clear: QTBIPoC are indispensable for the evolution of our world, our society, our community.

Founded in 2018 by GodXXX Noirphiles, House of Living Colors (HOLC) is an open drag and performance collective particularly for queer and trans black and people of color (QTBPOC) to explore the intersection of gender and performance. The house was created after several members in the house experienced poor treatment or exclusion from venues or organizations within the mainstream queer community in Berlin. The collective is made up of people from various backgrounds therefore the collective situates itself in an intersectional ideology and practice.
Animation: Xixi Diana